There are moments in a life - defining moments where you can identity time, date and place, where a life changed. Birth. Marriage. Death. While there are many others, I have uncovered a moment that I had not considered before.

Many years ago, I left my native Australia and settled in the United States of America. I would never yield my native country, as it became more apparent that I would need to take on another country.

In the middle of the pandemic, my approval to become a United States Citizen arrived. Poignant. While there would not be the same solemn ceremony, it was a "make best" situation.

At Cabrillo Point earlier today, I swore my Oath and became a United States Citizen.

The ceremony was captured and later reported in the various media outlets.

The San Diego Union Tribune captured a still and quoted me in their feature article. 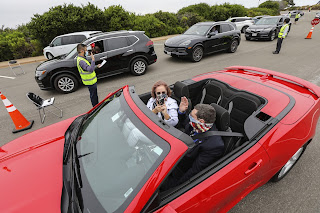 And for the Spanish speaking community, on Telemundo 20.

In Charlotte, North Carolina, the San Diego citizenship ceremony made the evening news. The story was picked up and carried across the nation appearing in Atlanta, Boston, Houston, Ohio, Georgia,   MSN, the Point Loma OB Monthly Magazine, and the Border Report.

I am grateful for the well wishes, the supporters, and even the nay -stayers. This has been a long wait, and the next journey begins.
Posted by Grant Madden at 9:00 PM