When I was a child, my parents divorced. As a teenager I visited my father at his place of work one time and saw a photograph of my brother and I on his desk. It was an old photograph, taken when we first started school.

When I asked my father about it he said "It's my favorite photograph." 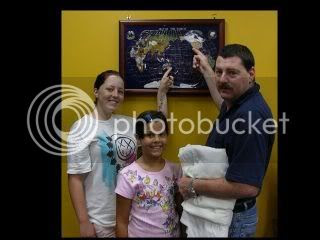 Earlier this week I was sitting at my own work desk when an employee asked about a photograph of my own daughters. The phrase rolled off my tongue.

"It's my favorite photograph."

And in a moment of revelation, I learned yet another thing about my own parents divorce. My father's favorite photograph was just that, because,  that is all that he had.

The young girl in my photograph will be 21 in about three weeks. It's been four years since we spoke on the phone, and nine years since I have seen her. I have no idea who she is now.

With reverence to Ringo Starr, now, all I've got is a photograph.


Posted by Grant Madden at 8:27 AM No comments:

Some Days Are Harder Than Others

Some days are harder than others.

The writers copy of Chicken Soup for the Soul: Angels and Miracles arrived today.

I cannot even look at the cover without crying.

My first copies usually go out to community organizations, libraries, and my Alma Mater Villanova College.

Not this time. They'll be going out to those who carried me through the story.

Anthony, Dave Parker, Judith, and one other.

One copy will be held back for his children,  to read of their father impact.

One copy will be held back for my children, to read of the impact of their father.

Posted by Grant Madden at 5:30 PM No comments: