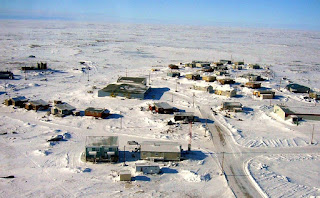 On the last Friday before Christmas, I shut down my computer, left the pager on the desk, turned the "out of office" on and headed through the door, making my way to the airport headed for Chesterfield Inlet.

It appears upon arrival I may be somewhat warmer than other parts of the United States.

Posted by Grant Madden at 7:31 PM No comments:

I'm sitting at Atlanta International Airport, - one of the largest and businest airports in the world.  People coming and going and moving between places.  While waiting for my flight, the gentlemen who was sitting beside me gets up. He has four or five seats covered with luggage, childrens toys, and a stroller.  He wants to go to the restroom and asks me to look after his lugagge.

"I'm not supervising your luggage."

The guys walks off.  Where is the rest of his family? Who has the children associated with the stroller and toys? I'm not your minder of luggage. And shame on you for asking.

After the divorce when I was out with my daughters, then a single Father, I had to rely on myself to do all the tasks associated with raising children. When we travelled I made sure we travlled as a group and accompanied the girls everywhere - except into ladies restrooms.

Was it difficult? Absolutely. There were times when I wished I had female companion to assist the girls, but, I didn't...and I had to look after our own luggage.

I would not have wanted anyone to supervise my luggage.

See Something, Say Something.

I called the Department of Homeland Security to supervise their luggage.

Posted by Grant Madden at 7:33 AM No comments:

On November 1, 2022,  Chicken Soup for the Soul will release the next book in their series, My Wonderful Wacky Family.

Almost four years, to the day, since I was last published within the Chicken Soup for the Soul series, I have returned to their publications with my next story, My Wifes Ex Husband.  This is the story of Joe and I - two divorced men trying to make sence of the relationship when I marry into the family.

It is, in my mind, one the two most difficulty pieces of literature that I have written, and conicdently, the piece prior to this, was the previous most difficult.

My Wifes Ex Husband was written during the pandemic while I was the in house carer for my wifes mother. It was written of the most significant man in my life, outside of my own father.

It was an honor to write of Jeanette's son, Jillian and Janeva's Dad, and Everley's Grandpa.

Posted by Grant Madden at 7:30 PM No comments:

You Snooze, You Loose

In 2009 I started working on a second major body of work. That piece was a factional account of global sporting event.  The work was started in what was known as National Novel Writting Month. Participants would write their story, upload the title and synopsis, and as they proceed, enter a word count for their body of work.

My progress in that after completing the event, resulted in about 120,000 words written - but it was missing something. So, I set it aside.

Last week I returned to the body of work having sourced some information that would add the details I needed to complete the work. While researching that, by chance, I just happened to enter the parameters of my work into Amazon.

Son of a bitch. The exact same piece of work using the same title and a slight varient of my work was published in April this year, by someone I do not know.

You snooze, you loose.

Posted by Grant Madden at 8:40 AM No comments:

But I can't tell you.

Then, I can tell you the news.

But you will be second to know.

Posted by Grant Madden at 7:04 PM No comments:


The day could not pass without reflection.

This day will always be linked to another, which will haunt my horrors.

There, but for the stroke of a pen, go I.

Twenty five year later after that night, I would finally write of him.  I will hold copies of the book for his children, should they ever ask.

Thirty one years after that night, I have not forgotten him.

Posted by Grant Madden at 4:25 PM No comments:

Each year on this day I think back to the first occurrence of this day. What occurred, what had to happen, who brought you into the world.

You have now been out of my life longer than you were in it, and your grandfather - Poppy, has lost the grandchildren he tried to recapture life with - after his children were taken by alienation.

And you will probably do the same, should you choose to have children.

Posted by Grant Madden at 10:06 PM No comments: