On January 5, 2015, I wrote of Google's Adsence Claim, that fraudulent activity was being conducted on my website.  Google, in their wisdom, disallowed the earnings incurred on my website.

Yesterday, February 28, 2015, I received an email from Google which stated:

We have now verified that we are no longer detecting PII being passed to Google from the account(s) under your control.

Thank you for helping to resolve this matter.

Google tech's using inhouse speak but not making any sense to their customers. With no prior notification of my personal information going "walkabout", this was alarming. A search located multiple threads about the Google Adsence program  passing Personal Identification Information (PII) from websites to outside interests.

Really? Could that possibly be the reason why Google detected unauthorized ad clicking on a blog that did not exist and did not have Google's Ads being displayed?

Google have not yet responded to three (3) letters sent to their corporate office requesting further information. The Google Adsence Claim is about to head to court.

#fraud
Posted by Grant Madden at 6:07 PM No comments:

Thank you to the Seti@Home project out of Berkley University, who have honored me as their User of The Day.

Has It Really Been Ten Years?


Has it really been ten years since my flight touched down at LAX?

Has it really been ten years since Adam and I sat around Toscani's complaining about the public holiday surcharge?

Has it really been ten years since the sun came up over the bay and set over the mountains?

Has it really been ten years since Dad BBQ-ed lunch?

Has it really been ten years since the drive up to Toowoomba to see my Godsons?

Has it really been ten years since I put a sail on the water?

Has it really been ten years since the last bout of "tickle wars" with my daughters?

Sadly, it has really been ten years.
Posted by Grant Madden at 7:38 PM No comments:

10 Years On - Running the Gauntlet


You see we've got a problem, you and me. We don't like each other much but we have to take a trip together. Now you can come along peacefully or you can be a pain in the ass. But I'm warning you: You mess around and I'll put the cuffs on you. You talk dirty - I gag you. You run - I'll shoot ya. My name is Shockley and we've got a plane to catch. Let's go.

Posted by Grant Madden at 10:50 AM No comments:

Outback Steakhouse embarrasses itself by flying the incorrect national flag of Australia.

After tweeting to +Outback Steakhouse  on Twitter,  it appears that I was blocked, and the flag was changed sometime on January 26. By then,  most Australians in the United States were already outraged.

There has been no response from the company.

Posted by Grant Madden at 11:01 PM No comments:

Google - the company so big, so large, that the left hand doesn't know what the right mouse click is doing.

In March 2014, the service provider who hosted a body of my written work, closed.  That body of work also included commercial ads using Google's Adsence program. In April 2014, an alternative service provider was located and a new blog was commenced. An application was made to the Google Adsence program for the inclusion of the new blog. Google's policy is that Adsence accounts cannot be added within the first six (6) months of a new blog.

At the end of the six (6) months, I applied to have the new blog included. The application for the new blog was rejected based on fraudulent activity.

Fraudulent activity? While the blog didn't exist and a replacement was not yet approved?  This appears to be more of a case similar to the class action suite launched in May 2014 which accuses Google of cancelling Adsence accounts just prior to paying out. I checked the balance of my account, and sure enough it's about ready to pay out my earnings on the previous blog.

A few more searches located two interesting articles. An unidentified whistleblower reports that Google cancels Adsence accounts just prior to payout, then keeps the money already paid by the advertiser.

I tracked down a successful civil prosecution of Google for the cancellation of an Adsence account in California from 2009, and discovered that trying to get an answer from Google, is almost next to impossible. While Google has a legal department, trying to locate a telephone number for the Adsence Department is futile. Even with telephone calls to their corporate office, I could not reach anyone who could communicate with me.

I lodged an on line appeal against my "fraudulent activity" and added the details I considered necessary, with the appropriate legalities if the account was not reinstated.  There was no response to my emails, but this morning, Google Adsence now appears on my blog.

I surmised that some agent at Google "reviewed" my appeal, went back and saw that their claim of fraudulent activity could not have occurred in the period allowed, as there was no blog or other site upon which any Google ads appeared.

I wonder how much in "earnings" is left in the hands of Google when they cancel accounts for fraudulent activity, that aren't contested.
Posted by Grant Madden at 3:42 PM No comments:

How Fast Can It Go?

In about 1981, my father purchased a sailing catamaran. My brother and I got together and both of us, instantly, asked the same question. "How fast can it go?" And thus we started racing that catamaran, together.

That was not successful. My brother and I were two different types of sailors - he was a helmsman, I was the tactician. As teenagers, we argued over everything from set up to pull down. Eventually, I stepped away to another class, and he became an accomplished helmsman.

In 1986, the Australian Championships were held at Bargara Beach, Queensland. My brother was one of the favorites to win the title.  Ten days before the start of the titles, I secured a boat on loan to go to the titles. It would be the first time that he and I had ever gone "head to head".

He didn't win the title. In seven heats he couldn't beat me once. The driving moment was when I won a heat and eventually finished fourth outright. My brother, finished ninth. In the following years, I would go on to win a record seven titles. My brother, he never sailed again. 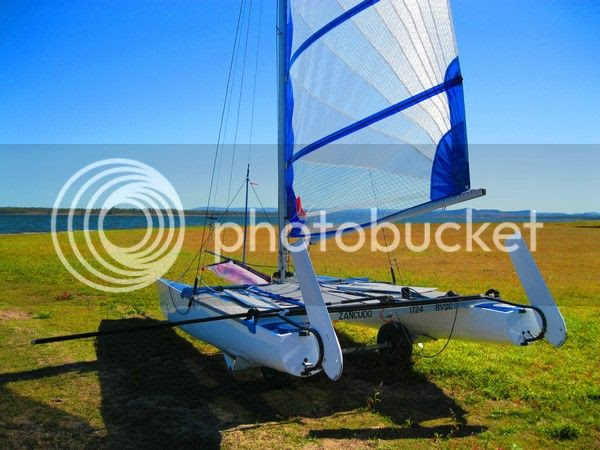 After leaving Australian and being gone ten years, my father telephoned me last year. "Your brother bought a boat." My brother stripped, repaired and rebuilt that shell, turning it into one of the best presented crafts on the water.

How fast can it go? Bring it home, Brother.

Posted by Grant Madden at 6:35 PM No comments: